Paisley has started using a big girl cup! I read that it's possible if you just teach them and it is! I am really hoping to transition her straight from boob to cup after the year mark. She's had bottles, and I don't have a problem with them or anything, I just don't want her to get hooked. I've heard the goodnight feeding is the hardest to break, and I really don't have a problem continuing that after the year mark, I'm just hoping that we can smoothly transition her to milk in a cup during snacks and meals and call it good, and then maybe continue to nurse the last feeding. We'll see...she may not need it. Luckily she doesn't usually fall asleep nursing-we put her to bed wide awake and she's learned to go to sleep so I don't know if she'll even need it...I can't believe how big she is! She is so much fun. Her poor teeth have been giving her troubles off and on so she's been more needy lately but thank goodness I'm home. I think it would have been really hard on Jon if he was the one here trying to do school and work still.

He loves his new job. I think it's been a long time since he's been in a positive work environment where he's not constantly being torn down-he doesn't understand the positve encouragement and love he's received so far. It's so funny. Instead of all horrible IM's and phone calls he used to recieve (his old job rarely bothered to address him in person whether he was in the office or at home) he gets constant praise and feels needed. It is so nice for him and so comforting for me. He spent so many months wondering if they were just trying to make him quit because they were so awful-now he's had threats of murder at his new job if he even jokes about leaving! He loves it. They are such good people. We feel very blessed.

In other news...while I was sick I watched Anne of Green Gables. I don't know how many other people have seen those movies but I LOVE THEM! We used to watch them as kids and I haven't seen them in years! If you haven't ever seen them watch them. It's so worth it!

I am so sick. You would think that with the weight of the store lifted off of me I would feel like a million bucks, but instead I'm spending my first official week at home (no longer co-manager in any way) sick in bed. It's awful! And of course, because I am sick, so is Paisley. I just feel bad for the poor thing. I hit a breaking point yesterday though that was pretty bad. Because she is sick and teething as well she spent her naps crying, her play time crying, her bath time crying...just about every time other than eating crying. I almost lost it. When I'm not sick I can handle the incessant screeching, but when my head is pounding and I can't seem to keep up with my nose running it's extra hard. I locked myself in the bathroom with the fan on for 5 minutes yesterday to recollect myself because I wanted to yell back at her and have a come apart. She was still crying when I came out so we went and got some soup (car rides seem to help everyone). She has been a million times better today so I think she's feeling better. I also may have lashed out at her yesterday. She decided just yesterday to try biting me after she's done nursing. She has one razor sharp tooth on the bottom. She bit me the first time and I yelped and said "no!" and she laughed. So she tried again next time she ate. Same story. So she tried one more time yesterday and I didn't react (I was trying to make it not exciting) so she bit harder. Like drew blood harder. I pinched her. I did. She cried. I felt bad. She hasn't bitten me today. So maybe it worked. I pinched my child! I still feel bad, but at least she's not biting me! It was one thing with her little gums, but this tooth thing is awful! I keep telling myself I just want to make it to a year...just a year...only 1 1/2 months away! We'll see...
around 3:04 PM 4 comments:

We're going camping Friday and Saturday and EVERYONE is invited! We're going to Sand Hollow Primitive Camp Area. It's $15 a night. They have port-o-potties and a nice sandy beach to camp on. Friday night we're doing bring-your-own hot dogs and smores and Saturday we want to dutch oven so we want to do food assignments and get a head count! Come! And if you have access to firewood bring it or please let me know! If you can only make it for one night or need to leave inbetween or just want to come out for dinner and then go home we'd love to have you!!!
around 9:26 AM No comments: 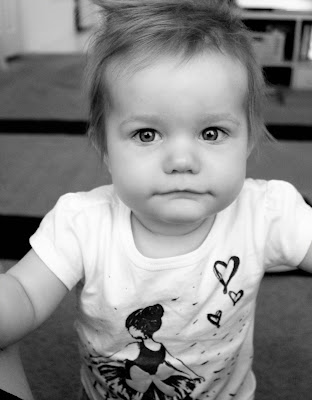 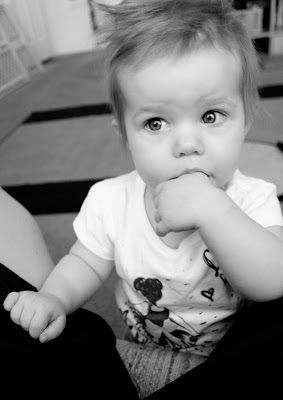 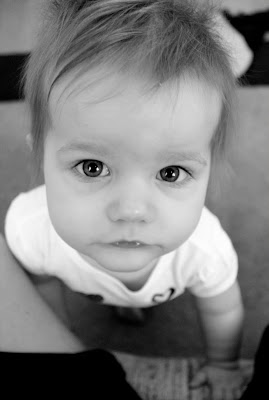 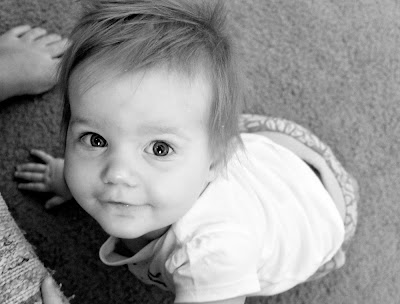 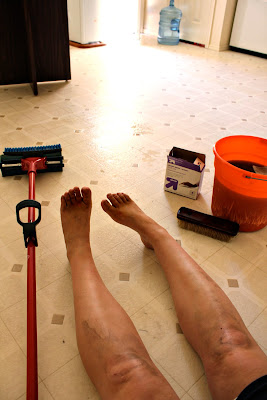 You'll notice not only the blackness of my knees, but of the mop water that is the scariest... This was my first official project while home, and it was desperately needed. After an initial bleach brush with the mop, another brush over with the horsehair brush by hand, and a lot of mr. clean mop stuff that smells like yummy lavender, the magic eraser really did the trick. This photo only slightly shows off how truly filthy my knees and legs are...it was bad. Paisley would crawl over to say hi to me while I was cooking and such and end up with big black marks all over her hands and knees...it was so gross. One cleaning project down, oh so many more to go...
around 12:36 PM 2 comments:

I am sad. I think for me perpetual happiness comes with a cost. When I am sad, I get really, really sad. For days I lay in a rut, depressed and low. I consume too much chocolate. And I obsessively clean things, particularly bathrooms. I can sit and stare at a wall for hours. Or the ceiling. Or anything. Everything makes me cry. Glee, commercials, songs...everything. I can't sleep and when I do my dreams are so chaotic I wake up sore and exhausted. For the past 8 days now I have dreamt of someone I haven't spoken to in years. He has completely fallen off the map to me and I can't figure out why I'm dreaming about him. I don't remember the dream either-just chaos and that he was there. I asked Jon the other night "Do you think maybe he died and he's haunting me?" He was like: "Why would he haunt you?" Good point. I don't know. Why am I dreaming about him? Why am I in such a weird funk? Why am I so sad?

Reason's for me to be sad:

Reasons for me to be happy:

I think today will be a better day. I'm already feeling a little better...

Email ThisBlogThis!Share to TwitterShare to FacebookShare to Pinterest
related to sadness

{unbelievable}: my identity has been stolen!

I'm a little freaked out! There is a hack using my name and doing photography and she's not very good and her website sux!!! I can't believe someone would just steal my name like this!
http://aprildavisphotography.net/
Actually, I was testing to see how difficult it would be to find me if you didn't know my married name, and then how difficult it would be to find me even if you did know my married name. It's difficult. There are a lot of April's out there and a lot of April Davis' and April Clark's. It's a little weird....
around 12:20 PM 2 comments:

Why I know I'm a mom:
Funny Story:
So Jon and I were in the ER early last week because Paisley had a 102 degree temperature that would not go away. Of course we waited until midnight to take her in (any earlier just wouldn't have made it a trip to the ER). Anyway, 2:30 AM rolled around and Paisley was fussy from being poked and prodded and Jon was doing something to annoy me and I said, joking "I will fight you! And I will so win because you won't hit a girl!" He turned to me and said "You know, we've been married 5 years...I think at this point I would at least defend myself." "And what in 10 you fight back and at our 50 year we have a fight to the death?!?" We died laughing.
around 11:56 AM 2 comments:

{reflection}: man in the mirror

I've been thinking a lot about how critical I am. I pride myself on trying very hard not to be a judgmental person based on appearance, past, and such but the more I get to know people, the more critical I am. I'm nicer to perfect strangers than I am to people I know well! This has always worried me, but worries me more because I want to be able to look past all my children's imperfections and love them unconditionally, but so far those that are close to me are judged much, much harsher than people that I just met. I can't decide why that is. I know part of it is because I know that they know better. But beyond that, I don't know. I look at the bad decisions friends of mine have made and their lot in life and I think: 'you did this to yourself!' but hear the exact same situation of a perfect stranger and think: 'wow, that's hard. you'll make it through.' Isn't that terrible! Luckily I've learned not to be too harsh to Jon (I think he found some sort of loophole), but even sometimes I catch myself holding him to such a high standard and I feel bad for him!! He doesn't help much either, but he has it the right way around. He's viciously critical of complete strangers and loving and understanding towards friends. I recognized this was a problem of mine months ago, and it's something I'm really trying to work on but I still catch myself feeling this way sometimes and it makes me sad. I know I hold myself to a very high standard, and I am very critical of the things that I do, but that is no excuse to do so to those that I know and love! Where is the line?
around 1:50 PM 1 comment: 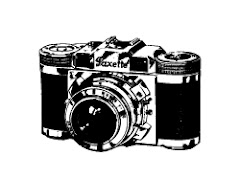